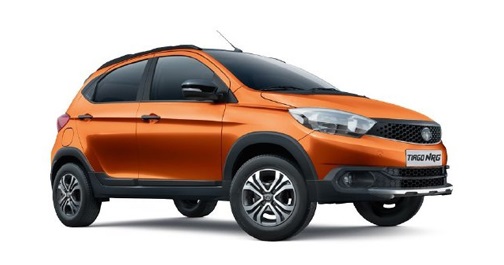 Tata Tiago NRG: The rugged derivative of the standard Tiago!

Tata Motors has been on a launch spree for quite some time now. As a carmaker that only had the Indica derivatives, Aria, and, not to forget, the Indigo in its line-up, Tata Motors have done quite well in revamping its product portfolio in the country. As you might be aware, the car that forayed the brand’s new design language was the Tiago.

The Tata Tiago was a ground-breaking product for the manufacturer, which is why it became an instant success in the Indian market. It was loaded with equipment, had the segment-leading quality interior, and the price was just right. The Tiago line-up was revamped over the course of time with the addition of new variants and features.

But the one we will be focussing on is the added ruggedness with the NRG-spec Tata Tiago. Based on the erstwhile XZ trim from the pre-facelift Tiago, the NRG differentiated itself with some additions such as a plastic cladding running across the body, revamped bumpers with skid plates, black-finished ORVMs, door handles, the addition of roof rails, and a black-painted roof. And yes, those wondering, it did miss out on alloy wheels. Here’s a complete model overview.

Apart from the changes above, the NRG did not bring anything else to the table. It sure has the appeal of a typical cross-hatch, however. As for its overall dimensions, the Tiago NRG measures 3,793mm in length, 1,665mm in width, and 1,587mm in height. It has a wheelbase of 2,400mm, which is quite respectable given the segment standards. The kerb weight is 1,017kg, while the ground clearance is up to 180mm. Moreover, the fuel-tank capacity (at 35-litres) and boot space capacity (at 242-litres) is unchanged from the standard model.

Under the hood, the Tiago NRG was launched with the same powertrains as the standard model it’s based upon. However, as Tata decided to axe the 1.0-litre three-cylinder diesel, the NRG is now just a petrol-only model. Therefore, it comes powered with a 1.2-litre three-cylinder naturally-aspirated petrol engine, good for 84bhp and 114Nm of torque. It is mated to a 5-speed manual as standard. An AMT gearbox, too, was added to the mix last year.

With the diesel engine gone, the Tata Tiago mileage numbers are down by a margin. The erstwhile diesel engine was rated to deliver 27.28km/l. The petrol, too, isn’t far behind as it delivers 23.84km/l (as per ARAI tests) with either the manual and automatic transmissions.

While it was earlier based on the XZ model of the pre-facelift Tiago, the company added some features from the top-spec model from last year to spruce it up a bit. So, while the earlier car had electronically adjustable ORVMs, Tata Motors added auto-folding ORVMs to the mix last year, as it was based on consumer demand.

Moreover, while the earlier model had the basic 5.0-inch touchscreen with vintage connectivity features, the new model took the ante a step up as it featured a 7.0-inch touchscreen infotainment system with Apple CarPlay and Android Auto, apart from the usual connectivity features. Other features like a remote key fob, steering-mounted controls for audio, height-adjustable driver seat are also part of the list.

The Tiago NRG, as of early-2020, comes in three shades, namely, Malabar Silver, Canyon Orange, and Fuji White, of which all are available with a contrast-painted black roof.

All the details regarding the Tata Tiago NRG, namely, the engine, specifications, variant wise equipment, colours, dimensions, interiors, and exterior details are extensively covered in the brochure.

For more on the Tata Tiago NRG, be sure to tune in to autoX. Also, grab the latest info on the new cars, only at autoX.